Tourists in Argentina will be held on "Ways of the Pope" 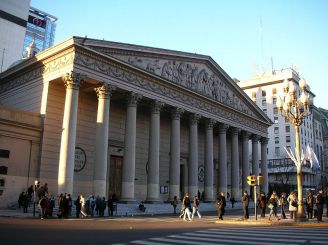 In the Argentine capital Buenos Aires, a new guided tour. It is dedicated to Pope Francis. As you know, the first time in the history of the pontiff was a representative of Latin America and the first time in more than 1200 years the Pope is not a native of the European country.

Jorge Mario Bergoglio was born in Buenos Aires in 1936. He was the fifth child in a large family of emigrants from Italy who worked railway workers. It is the capital of Argentina, Jorge Mario developed as an individual. Here he received a diploma chemical engineer. Here the priest chose his path.

On the route, tourists can visit 24 places associated with his life and work. The birthplace of Jorge Mario, the Cathedral of San José de Flores, which in 17 years at the feast of St. Matthew Horse realized that religious activity - this is his calling. Villa Devoto Seminary, where he studied, as well as St. Joseph's College, where he continued his education after joining in 1958 the Jesuits. It is also the Catholic colleges of Buenos Aires, where he taught philosophy, literature and theology. In addition, you can visit the Cathedral of Buenos Aires, where in June 1992 Horse Mario was consecrated bishop.

Guides not only show where he lived and worked for famous native of the capital of Argentina, but also tell you that the Argentines know Bergoglio as a humble man. As Archbishop, he lived in a small apartment, abandoned limousine with a chauffeur and use public transport, he prepares his food. And recently, in the status of the pontiff, asked a friend to renovate his Argentine shoemaker old shoes. In addition to Spanish, the new pope is fluent in German and Italian. He loves football and is a fan of the club "San Lorenzo" of Buenos Aires.

"The Way of the Pope" - so the city government of Buenos Aires called the new tourist route. Interest in the life of Francis high. It is assumed that the new tour will be very popular with travelers. In the future, obviously, will be a special and a museum dedicated to the head of the Roman Catholic Church.

Feedback
Your attention and time spent on the site IGotoWorld.com is greatly appreciated. If you have any questions, wishes, complaints, or you desire to learn more about us, select the area you are interested in and click the link to make a comment or ask a question.
Feedback form
Request submitted successfully.
Send